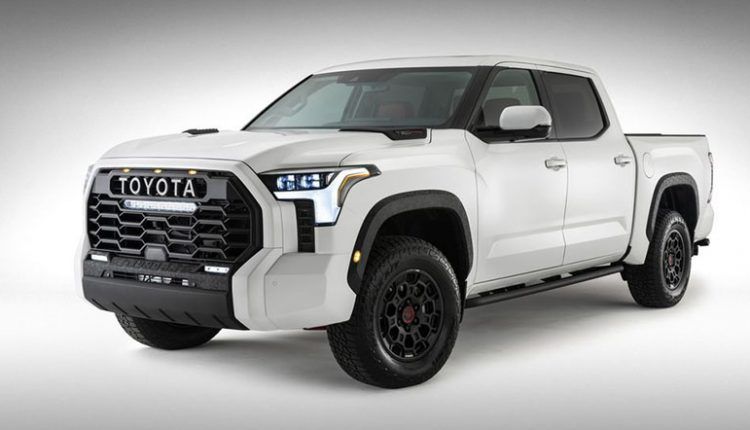 After the leaked photos of the 2022 Toyota Tundra, the Japanese automaker has released an undisguised picture of the Tundra TRD Pro model. The full-size pickup truck will debut soon and hit the showrooms before the end of this year.

Seeing the photos, we can see the offroad-focused TRD Pro has a black grille with three unified LED light bars. “Toyota” lettering can be seen on the upper side of the grille while the “Tundra” is engraved on the lower front bumper. It sports wheels exclusive to TRD Pro featuring 285/65 Falken Wildpeak all-terrain tires.

The new 2022 Toyota Tundra will reportedly feature a new twin-turbocharged V-6 engine. Some days back, Toyota released an image of the engine cover showing “iForce MAX” marked with blue lining, proposing a hybrid powertrain. It will surely be one of the options.

Another tweak we expect in the new Tundra is the new rear suspension, which could use coil springs, air springs, or it could be independent.

The official details will come out in the coming months. The Tundra TRD Pro is expected to cost more than $50,000, while the regular model will be priced at $36,000.