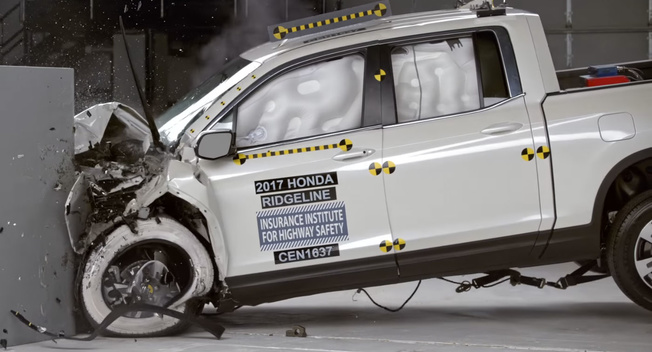 The 2017 Honda Ridgeline becomes the first pickup truck ever, receiving the top safety pick plus rating from the Insurance Institute for Highway Safety. Before the Ridgelines, the Ford F-150 was in the lead with top rating in crashworthiness, but it had ‘poor’ rating in headlights and ‘basic’ front crash prevention system.

The 2017 Honda Ridgeline is one of the seven cars that earned a ‘good’ rating in the headlights assessment. However, it should be noted that only the top RTL-E and Black Edition variants received ‘good’ due to the LED projection lights, whereas all other grades achieved a ‘poor’ rating, as they are fitted with standard halogen lights.

For the crash test, the 2017 Honda Ridgeline got an intrusion of just 11 cm in the small-overlap test, which indicates lower risk of injuries in case of a collision.

Honda is committed to develop high-quality and totally safe vehicles for passengers. The recently launched Accord Sedan and the Pilot also earned a top safety pick plus award form IIHS, while the Accord Coupe, Civic Coupe and the Honda Civic Sedan obtained a top safety pick award.