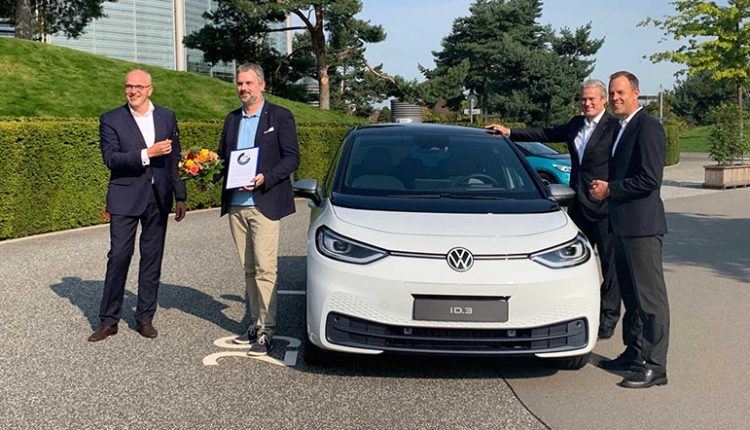 Volkswagen Delivers the First Unit of ID.3 1ST Edition To a Customer

It will be followed by the ID.4 electric crossover.

The first model of the I.D. series built on the MEB platform, the Volkswagen ID.3 is ready for customer deliveries. The first example of the limited edition 1ST (only 30K will be built featuring 58 kWh battery) is delivered yesterday to a proud owner – Oliver Nicolai – at the Transparent Factory in Dresden, Germany by Volkswagen’s Sales Director Jürgen Stackmann.

Customers in Germany as well as in other markets will possibly get their hands on the all-electric car very soon since the company has already shipped the first batch of ID.3 to the UK, Norway, Sweden, Italy Netherlands, Ireland, and other parts of Europe.

Feels great to see the happy faces of our #VWID3 1 ST customers! 😀
I ask everyone else to be patient – the ID.3 is on its way to you! 😉#eMobility #zeroemission #VW pic.twitter.com/0BQ0BaqTiv

Overall, the company expecting the all-electric hatchback will witness a surge in sales and probably will surpass 10,000 registrations in Europe, in this month only.

The Volkswagen ID.3 will be followed by the ID.4 electric crossover, which is currently being developed and hopefully will be ready for deliveries before the end of this year.

The company has invested billions of dollars for the production of its all-electric lineup and hopes to attract hundreds of thousands of sales every year.